Welcome to a long-awaited guest post for our book lovers out there. Today’s guest is Andrew Joyce, a wonderful fictional writer who takes the journey to America, hoping for a better life, to a whole new level.

Without further ado, I’ll hand it over to Andrew…

My name is Andrew Joyce and I write books for a living. Eloisehas been kind enough to allow me a little space on her blog to promote my new book, Mahoney. So, I thought I’d tell you how it came about. But to do that, I gotta tell you how my mind works.

A few years ago, I had just finished reading Mark Twain’s Huckleberry Finn for the third time, and I started thinking about what ever happened to those boys, Tom and Huck. They must have grown up, but then what? So I sat down at my computer and banged out Redemption: The Further Adventures of Huck Finn and Tom Sawyer. I had them as adults in the Old West. Kind of like Wyatt Earp type characters. It was a modest success and won an award as Best Western of 2013.

I think my favorite book of all time is The Grapes of Wrath by John Steinbeck. I’ve read it a number of times over the years. The last time being two years ago. Now, for those of you who may not have read it, it’s about one family’s trek from the Oklahoma Dust Bowl of the 1930s to the “Land of Milk and Honey,” also known as California. Of course, California wasn’t a land of milk and honey. If anything, the family was worse off in California than they were in Oklahoma. The subtext of the book is how those on the lower rungs of society’s ladder are oppressed and have very little voice to fight against that oppression.

Near the end of the book, Tom Joad, the protagonist, runs afoul of the law and must leave his family or else be arrested on a trumped up charge or be killed by the big landowners’ goons.His mother, quite naturally, will miss him and is worried for him. The words he spoke to her in that scene have become iconic.

So, here’s what I did. Just like with Huck and Tom, I started thinking about what ever happened to Tom Joad after he left his family. I wanted to write about injustices and the people who suffer those injustices. I thought I’d follow Tom around and write about what he encountered from about the mid-thirties to 1963 when Martin Luther King, Jr. gave his “I have a Dream” speech.

However, there was just one problem with that: copyright laws. The character of Tom Joad belongs to the heirs of John Steinbeck. So, I had to come up with another angle. After somethought on the matter, I decided to expand my initial time frame from between 1933 and 1963 to 1849 and 1963. I’d start the story in Ireland during the potato famine and work my way to America and then I’d end up where I had originally intended.

Here’s the blurb for the book:

In this compelling, richly researched novel, author Andrew Joyce tells a riveting story of adventure, endurance, and hope as the Mahoney clan fights to gain a foothold in America.

In the second year of an Gorta Mhór—the Great Famine—nineteen-year-old Devin Mahoney lies on the dirt floor of his small, dark cabin. He has not eaten in five days. His only hope of survival is to get to America, the land of milk and honey. After surviving disease and storms at sea that decimate crew and passengers alike, Devin’s ship limps into New York Harbor three days before Christmas, 1849. Thus starts an epic journey that will take him and his descendants through one hundred and fourteen years of American history, including the Civil War, the Wild West, and the Great Depression.

Well, that’s how Mahoney came about. For those of you who may read it, I hope you enjoy it. It took me almost two years of full-time research, writing, and editing to get it to where I wanted and to tell the story I wanted to tell.

Thank you, Andrew. For anyone interested in a taste of the book, here’s a little excerpt to tantalise your reading taste buds:

The reflected firelight flickered across awestruck faces and mirrored in the eyes of those who listened as stories were told of yesterday’s indignities and tomorrow’s aspirations. The look in those yearning eyes spoke of hopes and dreams. The laughter heard around the fire conveyed a sense that somehow it would all work out. For a few short hours, on Saturday nights, in the deep woods of a place none of them had ever heard of before, the constant fear that lived within their hearts was banished from their lives.

In time, they would prevail. Their sons and daughters would one day stand straight and tall as proud Americans, as proud as their fathers had been to be Irish.

It has been a fair bit of time since I last wrote a blog post for Book Tuesday. So, grab your cup of whatever, come sit by me and let’s discuss what we have been reading over the past weeks.

Since the end of the school term and my school year, I’ve taken advantage of my free time between the sprogs, pets and general housekeeping to catch up on my much anticipated collection of must-reads. So far, I’ve tried to reach many of my blogging friends’ books, but alas, have not conquered the pile which is starting to resemble Mt Everest.

Whilst delving into romance, kicking back with crime thrillers and adding to my general knowledge with well-known best sellers, some stories have floated back up to the surface of my writer’s mind, bobbing away until I rise to the bait and take a nibble. Such dark little demons giggle from the shadows, tempting me to write out my quirkier fantasies that usually remain locked away for ‘special’ horror writing days. 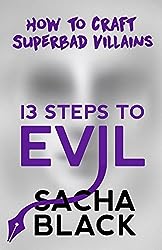 Saying that, a quote from Sacha Black’s 13 Steps to Evil: How to Craft a Supervillain  resonates with that dark side. “Whatever doesn’t kill you, makes you stranger.” (Quoted from 13 Steps to Evil, discussing the insanity of the villain: the Joker) Needless to say, my villainous tendencies are usually packed in a box for those deliciously dark days when the writer takes over and throws caution to the wind, sending the superheroes aflutter with dastardly deeds delivered by my delectable diabolics. Of course, this doesn’t happen without the stimulation of a good book like Sacha’s. A catalyst needs to be created to form such stimulus and she has it in buckets!

I am currently enjoying a book from Sacha’s great collection The Eden East Novels –  Keepers.  Now generally, I’m not a great fan of Science Fiction and Fantasy, preferring the creepier realms of horror or crime fiction, but her book surprised me. Similar to 13 Steps to Evil: How to Craft a Supervillain, Sacha’s words resonate and make the story flow in a way that keeps me wanting to read more. I tend to read at least three different books at the same time when on a role (usually covering different genres for interest’s sake); her book is calling out to me to be read first every day and, to be honest, I can’t resist.

Sitting next to my phone with Sacha’s book safely stored inside is Charles Dickens’ Hard Times and Robert Crais’ Indigo Slam (both paperbacks). They are in great company with Sacha’s collection and I look forward to diving into her next novel, Victor (the next book in The Eden East Novels collection once I’ve finished these three books. I’ve already finished the sloppy romance series I was reading and have now absorbed enough sweetness to last me a week, so this selection provides me with the perfect balance for nutritious reading. I do enjoy having a good collection of writers at hand to focus my own writing skills.

Now, this is not all about me. I  would love to know: what’s on your night stand waiting to rock your world?

Before I end this post, I must remind you that any book your read deserves a review. Authors need their readers to respond so that others can find their books. So please, be kind and leave reviews.

Posted in Book Tuesday, Books, If We Were Having Coffee, Weekly Trail

It is with great pleasure that I get to announce that my books are now available at the Woodley Library in Reading. From Spoilt Miranda to The Iron Pendulum, they are rubbing words with the likes of Tom Clancy and Julia Donaldson!

It’s not the easiest thing to get your books into your local library and it can take a while for them to be vetted and loaded onto the database. But that’s not the most exciting thing: it’s opening a copy of your book and finding the first page stamped with dates acknowledging the book has been taken out for a spin! That’s when the bubbles ricochet against your rib cage and you realise book lovers have access to your words, anytime.

I’m jumping for joy and would like to thank the librarians at Woodley Library for adding my stories. Little events like this mean so much to budding authors like me.

If you get a chance, why not ask for an independent author’s story to be added to your local library and don’t forget, spread the word with reviews – we all need them!

Hello and welcome back to Book Tuesday.  As it is nearly Valentine’s Day, I thought I would choose a book from my list of all time favourites: Scarlet Shadows by Emma Drummond. 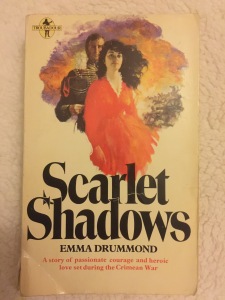 I spent most of my teenage years in my bedroom, emmersed in different worlds from various genres.   My favourite genre was, of course, Romance.  I tried my luck with the normal teenage high school romances, but they lacked reality, especially for a girl like me.  My dad loved supporting the RSPCA and we usually carried away most of the book stand after every fete held to raise money for such a good cause.  This beautiful book sat amidst Frank Yerby and Wilbur Smith, enticing me with its cover.

There is something wonderful about a well written historical romance; the idea that the reader is walking in the past, following the etiquette, fashion and fantasy of a time we may never capture in our lifetime.  A time when gentlemen bowed to ladies and crinoline dresses were the fashion.  As you draw in a breath, inhaling the passion shared between two young lovers, the historic backdrop sends your blood rushing as the canons blaze and soldiers fall again, reliving their past through your eyes.

Just writing about this book makes we want to read it again.  Unfortunately, my copy is well loved and ratty, but with enough tape to hold the pages together, I will take another trip to see Victoria with her husband, Charles, and Hugo, his adopted brother and captor or her heart!

Scarlet Shadows is still available from Amazon and I would highly recommend it as your Valentine’s Day read!

Have a lovely week and thanks for reading.