When Do We Fight?

As the world bathes itself in the blood of innocents, ignoring their cries as they bleat acknowledgements to corrupt leaders, I ask: when do we fight? END_OF_DOCUMENT_TOKEN_TO_BE_REPLACED

Come outside with me. The view out here, as described by my new neighbour, looks like an African sunset. Orange hues blended with saffron and hints of turmeric dust the trees on the hilltop in the distance, capturing the last light of the day in spectacular splendour.

I suggested tea today because we always seem to drink coffee. It has been a while since I’ve had my Darjeeling tea and I do miss it. What about you – any favourite beverages that you’ve missed?

Today has been my first day getting back to my book and I feel a bit overwhelmed. Not much has moved in the story and, the more I write, the more I realise that this tapestry of suspense is going to require my full attention. Writing the first book laid the foundations for the characters. This book requires more and to give it that extra pull, I need to monitor the characters closely. I don’t know about yours but mine tend to go off the beaten track if not watched carefully.  Sometimes, a new storyline appears because of their actions and I have to reprimand them or lose the plot!

Enough about the book. Let’s sit and enjoy our tea, the view and the wonderful company. Are you coming to the Bloggers’ Bash next month? If you hear a weird squeal, that’s just me trying to contain my excitement! There are so many people to meet and as much as I look forward to the meet and greet, I’m incredibly nervous too! So if you see me holding up the shadows in the corner, do come and hold my hand or bring me some Dutch courage to get me through it all!

Have a great week!

Cross Genre Promotion by Authors from Around the World 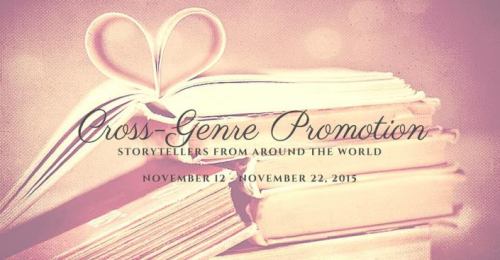 Many thanks to Michael Fedison for setting up this great cross genre book promotion, and also for including me in it. The authors included here from all around the world each have special deals for you starting from today and right up to the twenty second of November, so zoom on over to their sites to stock up on your favourite genres at very special prices. I’ve got a couple of deals and freebies too, which I’ll share the links to right after sharing the list of the fabulous authors taking part in this, with the genres that they write in next to their names. Every single one of them has discounts happening, so just click on their monikers below to check them out.

Lance Greenfield gives his opinion on Deception which is available from the Amazon website.

This is much more than a suspense thriller. There is romance, there is deceit and double-crossing, there is mystery, there is hot sexual tension, and there is fear.

Amanda returns to her native Harare on a work assignment. She tries to unravel some family mysteries which led to her self-imposed exile. Every stone she turns reveals a new, usually unpleasant, surprise.

She is torn between her former lover and her current almost-a-lover. She doesn’t know whom she should trust, including members of her own family. There are many tests, and the tension rises. The reader is also torn in several directions. I challenge you to take the journey with Amanda and guess whom she can trust before she takes the right or wrong path.

The constant theme throughout is how much she cares for her son, Zach. The greatest…

It is with great pleasure that I share my coffee blog with you from a live location with an actual blogger sitting across from me! Yes, I was lucky enough to meet an author, blogger and friend for a Starbucks coffee earlier this evening after hobnobbing with wonderful intellectuals at a special workshop targeting the enhancement of Southern African countries. It was Lance Greenfield, author of Eleven Miles, who invited me to come along to this event and get a chance to promote my work to fellow Southern Africans.

The event was a success and I got to meet a variety of talented people in their own right. Lance was in his element chatting about his book and his friend Boikanyo who was one of the organisers. We were lucky enough to meet the Mayor and chat to him about literature, his term in office and the wonderful things he has achieved. His positivity and support for the evening was felt by all.

After exchanging details and promising to keep in touch with new found friends, we headed back to our lovely Bershire, but of course we had to make one special stop…at a local coffee house! It felt surreal to sit across from a fellow blogger and chat freely about things we could only get across in short bursts of conversation over the Internet. Lance chose a panini and coffee Americano whilst I stayed true to my classical hot chocolate and BLT. After filling our tummies and chatting incessantly, it was time to jump back into the car to continue the two hour journey back to my house.

Lance, ever the gentleman, saw me to my door, delivering me safely into the awaiting arms of the Hubble and munchkins. Promises we made for more coffee meet ups and hopefully a dinner too and Lance continued on his hour long journey to get home.

Thank you Lance for including me in your special day and I hope that the friends we met today stay in contact and I wish them every success in promoting the Southern African culture and heritage for the future generations. Best of luck to Lance and Boikanyo on their fantastic book and I am sure it will be a great success.

And of course to all my fellow bloggers – I missed you tonight and wished you could have been there with us for the coffee, the chats and the laughter. Today has inspired me to work hard so that one day I can throw a huge coffee meet up and invite you all from around the world to join us. 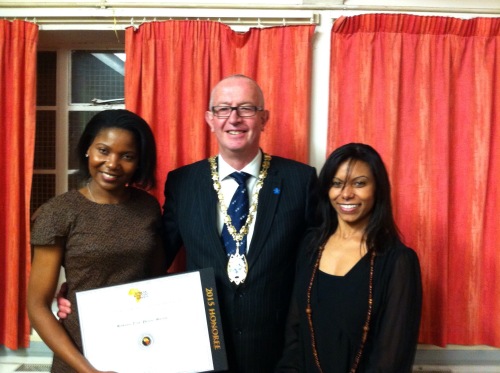 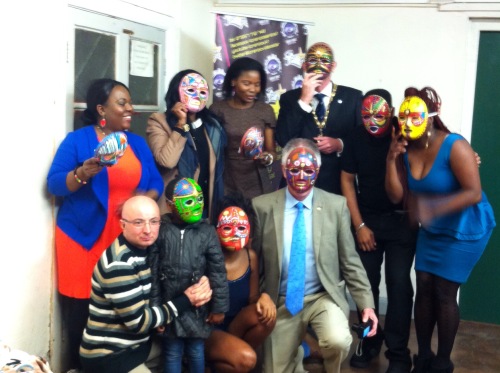 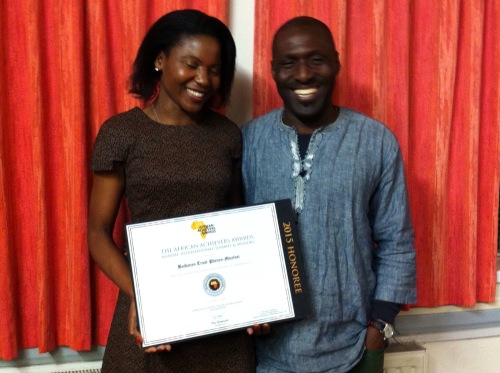 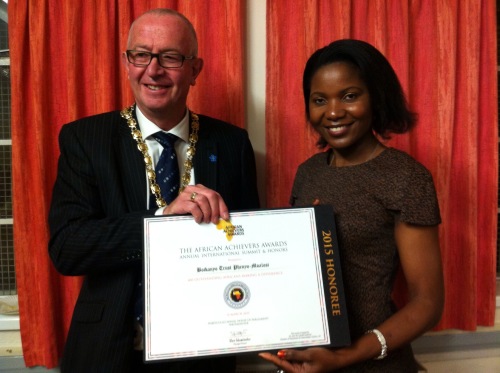 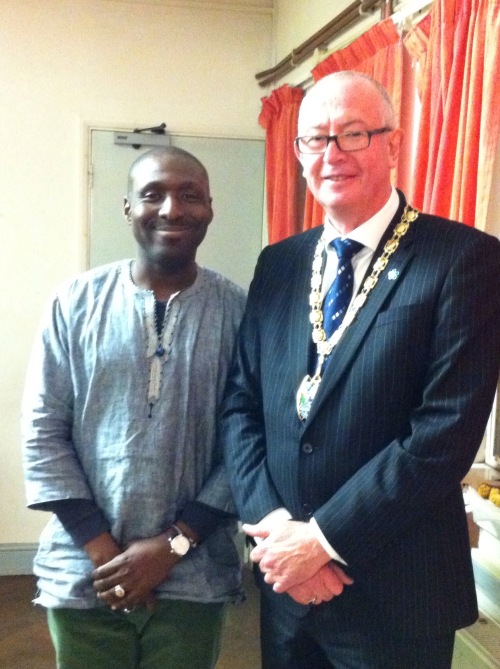 A little African Humour to brighten your Wensfriesday!!

The days are flying, weeks melting into months as we race towards the end of the year.

Take a break, breathe in and enjoy today. Even if it’s a rotten day, embrace it! Tomorrow will be different; the details will change. So take what today brings and just let it ride as you decide to celebrate Wensfriesday!

I once met a young man that promised me access to the world of art. Not the whole world, as it is so vast, but just a small beautiful slice of it. This was quite a few years ago, when Y2K was still a looming big deal! I was studying journalism at a local college and had the opportunity to be amongst men who would change the face of media in Zimbabwe later in their lives. Little did we know it at the time.

Anyway, back to my story. I had met a student who was very interested in local art and culture. For a girl of a mixed race background, it wasn’t exactly an area I could walk into on my own. Cultural differences and colour barriers usually made it difficult to explore certain places on my own. Being me, I had to have access.

In the city of Harare, past the bright sparkly glass buildings of the central business district and driving out along Samora Machel, a road so straight I’m sure the Romans would have been proud of it, there was a little vlei (open area of land) where some old men and women sat. It was opposite the turn off leading to the cemetery and sported long elephant grass lazily dancing in the gentle breeze and tall mupane trees lending shade to the workers sitting on reed mats under them.

The women were weavers and the men were sculptors. They sat there all day everyday, weaving and carving their wares to sell to the passing traffic. Blocks of limestone were transformed into animals or miniature figures of ‘madharas’ – old men captured in the midst of working on something with their hands. I was never sure if they used each other as life models for their sculptures and the thought only occurred to me now that it might be true.

My friend made a promise that we would meet up at the local bus stop in town and catch an ET ( emergency taxi) to the open spot and sit for the day with these artists. Unfortunately it never did happen as I was called away to another story I couldn’t afford to miss about a little girl called Patience, in the village of Mutoko suffering from Hydrocephalus.

Later, as a parting gift, my mum gave me two sculptures she had bought from the same place at the open vlei. Two madharas busy at work pictured above and below. These madharas have been in our family for many years and I keep them safe as a memory of where I am from. I do regret my missed opportunity (of which I’ve had many!) but knowing I have a little piece of their art with me makes me happy. 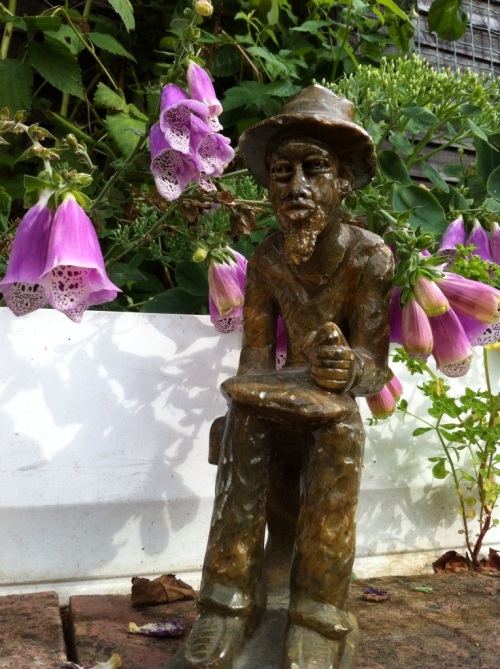 I write compelling contemporary romance with heroes to die for and heroines you will want to befriend. Happy Ever After guaranteed. Writer of Compelling Contemporary Romance