Category Archives: A Tale of Knots

I need a hero!

If you enjoyed Space Dust’s Little One and Big Ox, take a look at Hairington’s hairy hero, Babylock!
Risking it all to save the dome, he’s not afraid to find a creature strong enough to fight the Knotsvillians!

Book Tuesday: A Tale of Knots

Hello.  Grab a cup and come join me at the table. Unfortunately my evenings have turned into battles with unruly children, which cuts into my coffee time with you. Since we missed our Monday Coffee together, I thought it would be nice to have a cuppa and discuss a book today.

Firstly, how was your weekend?  I hope you had a lovely rest and got up to something nice. I had a relaxing time for the first time in many weekends because I have finished The Iron Pendulum at last.  It has taken a while to edit it as little wisps of the story kept pushing and pulling in odd directions.  They have been safely tied down and neatly packed away, so I’m happy.  My Hot Shot Updates newsletter went out successfully and a few lucky subscribers were given a chance to read The Iron Pendulum before it goes to market. 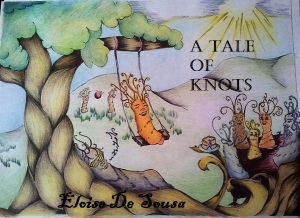 Now that one book is off the to-do list for the time being, it is time to concentrate on the next outstanding project.

I have chosen A Tale of Knots.

This little book has been sitting around for a while now and even though it is available as an ebook, it has had very little love coming its way.  Well, thanks to my illustrator, Carol-Marie, the story about the Hairs and Knots of Hairington will be coming to life very soon.  I have collected my original draft and her beautiful illustrations so that editing can begin again.  This will be the second or third time trying to get this little book to market!

Have another slice of cake and relax.  Let me give you a little excerpt of A Tale of Knots to explore whilst I pop the kettle back on.

Once upon a time, there was a rather special town called Knotsville.  Now the people of Knotsville were a lovely bunch. They worked hard together, weaving and plaiting to make beautiful designs. They sold or displayed their work in other towns.

Unfortunately, their nice nature left them open to attack!  For example, there was a particularly nasty dome of follicles that absolutely hated the Knotsvillians.  They were known as the Hairingtons!

“We all know how messy those Hairs are, right?” screamed a Knotsvillian to his friends.  “If we let the Hairs near our homes, do you think they will be neat?”

“Nooo!” came the response from the other Knotsvillians.

“We want neat! We want flat! We don’t want a messy plait!” sang the other Knotsvillians.

The Knotsvillians called a meeting.  It was time to make a stand.  They were small and few in number but, by Jove, they could tie any Hair into a knot!  It was decided – it was time to pay Hairington a visit.

This is from the Knotsvillian’s point of view.  The Hairs of Hairington have their own ideas about how to live and definitely feel the Knotsvillians are too tightly plaited for their own good.  The great thing about this book is that the Hairs and the Knots are exactly the same creatures.  They share the same looks and same feel, but have different beliefs.  Of course we have a special character, namely LeBrush, who is called upon to marshal the fight between these two factions.  He doesn’t want the job; in fact it is only through the influence of little Babylock that he finally decides to step in and stop the fighting.  Doesn’t this sound familiar with the world at the moment?

If you want a little story that packs a big punch and is written in a way that will be enjoyed by both children and adults, give it a try.  As I’ve mentioned before, it is available as an ebook and will soon be available as a paperback with some awesome illustrations. If you would like a copy, click on the cover pic and it will take you straight to its Amazon page.

Okay, sale pitch over, let’s move to the sofa and catch up on Crimial Minds.  Coffee is ready and the cake is just begging to be eaten!

Posted in A Tale of Knots, Book Tuesday, Weekly Trail

END_OF_DOCUMENT_TOKEN_TO_BE_REPLACED

Posted in A Tale of Knots, Stories

I’m furiously editing and primping the paperback copy of A Tale of Knots (snook version available here)and I’m so excited.  Carol-Marie, my illustrator, has decided to add colour into the mix and the pics are looking great!

The feel of the book is going to have a quaint, rustic quality and I hope the story is strong enough to carry this style.  Of course, I’m biased about it as I love the story’s ability to touch on ageless social issues.  Though it’s a children’s story, Hairington represents the various ‘domes’ we call home.  Knotsvillians represent the fundamental beliefs our society suffers from – the assumption that every race/culture/creed knows better than the other.  Instead of accepting the differences of the Hairs and their culture of free living and disorder, the Knotsvillians feel the need to rule the Hairs.

LeBrush stands for Hope.  The hope that we can thresh through the differences we all hold sacred and respect each other’s choices of lifestyle without persecution.  The perspective might not suit all readers, but hopefully the message comes across. The rights to freedom of choice should be given to everyone.

Now, I wonder if I should show you another sneaky peek at the illustrations?  If you missed my first exclusive, check out this excerpt on A Tale of Knots from my Book Tuesday post.

If I get enough likes, I shall post a pic or two later today.

Show me the love people!!

Posted in A Tale of Knots, Weekly Trail

Le Brush from A Tale Of Knots

Le Brush is the marshal of this town
The naughty knots are always making him frown
They like to play in the hair all day
Making it stand in a funny way.

But Le Brush works hard to chase away
The naughty knots keeping the hair in a fray
He brushes and brushes until the last knot disappears
And the hairs settle down
Giving Le Brush a nice cheer!

Well done Le Brush
The knots are gone
Till next time the naughty knots come along!

Posted in A Tale of Knots, Books, Poetry, Weekly Trail

A Tale of Knots!

Yes! At last the ebook is done. Several weeks of re-writing, editing, proof reading and fighting with the cover and I have another children’s book out!

Now this would usually be the part where I heavily market the book; pressing my opinions on why parents should download A Tale Of Knots for the children. I would try to describe the strong, brave, loving main character, Le Brush, who speaks with a weird Spaghetti accent that makes him pronounce words in an amusing, maybe confusing way. Or try to describe the love between little Babylock and his grandpa Ash. Yes, it would be a great feat attempting to get you interested in a book about the hairy dome of Hairington.

If purchance, you do decide to download the book, please leave feedback. It always helps knowing if I amused my target audience or absolutely bored them to tears! A writer can only improve with feedback from her audience.

Of course, this is the part where I compliment you and re-iterate what a kind audience you are and how grateful I am to have you listen to my periodicals and lame book promotions!

Forever aiming to please, I remain, your humble writer.