Hi and welcome to Book Tuesday.

For most of today, I have been posting reblogs of snippets from other bloggers promoting authors and their latest books. My little book corner has been rather quiet over the past weeks because of my house move and lack of time to read the wonderful array of books I have waiting on my kindle. Since I am in the middle of a book, I thought I would share my view of the story so far.

At the moment, I am reading a book by David Archer called Code Name: Camelot. The plot follows Noah Foster, a man who is put on death row for killing the men in his army unit during a mission in Afghanistan. Now you might think it’s an ordinary story about a murderer and the main protagonist is his JAG lawyer, Lieutenant Mathers; a woman who is willing to fight for what is right even when the decks are stacked against her. As she fights to find a solid alibi for Noah Foster, she finds out that one of the murdered soldiers happens to be the United States Congressman’s son who is currently running for president, making the chances of her winning her case more remote than igloos in Egypt. But that’s not all!

The author, David Archer, has made his main character have a condition where he has no emotional stimulus, a figure who has to evaluate the reactions of others and measure the moral balance of how to engage with them through logic and mimicking those around him. His main defense for the murders is down to the fact that he acted in the most logical manner when witnessing his fellow officers commit crimes against humanity.

I still have a way to go to finish the book, but I am excited to say that I do not think I will be disappointed. The action moves swiftly enough to engage a reader without boring them with too many details (well, in my case, because I have so little time to read, I need to get to the crunch faster!) Noah has just had his death faked and he is now joining a government agency that targets certain individuals who need to be eliminated for the good of mankind. I am hoping for a good twist amidst the chaos and a bit of a romantic interlude thrown into the mix.

Once I have finished the book, I will give a more thorough analysis of how well the book behaves towards the end.

If you would like to join me in reading David Archers, Code Name: Camelot, click on the link below to order your copy. Let me know what you think of the story. 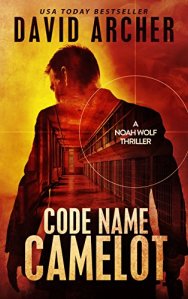